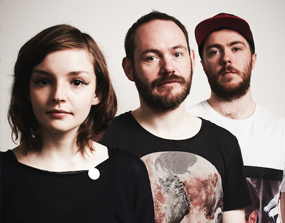 Chvrches (pronounced as “churches”, sometimes stylised as CHVRCHES or CHVRCH?S) are a Scottish electronic band, formed in 2011. The group consists of Lauren Mayberry (lead vocals, additional synthesisers, and samplers), Iain Cook (synthesisers, guitar, bass, vocals), and Martin Doherty (synthesisers, samplers, vocals). Chvrches came fifth on the BBC’s Sound of 2013 list of the most promising new music talent. In March 2013, they released Recover EP. Their debut studio album The Bones of What You Believe was released on 20 September 2013.

Before Chvrches, Iain Cook was a member of Aereogramme and The Unwinding Hours. He also wrote music for film and TV. Martin Doherty was a live member of The Twilight Sad. According to Mayberry, “Iain and Martin went to university together so they’ve known each other for quite a long time”.

Mayberry completed a four-year law degree followed by a Masters in Journalism. This led her into a career in freelance journalism for several years prior to music. She has played piano since childhood and drums since she was a teenager. From age 15 until 22, she played drums in various bands. Before Chvrches, Mayberry was member of two local bands, Boyfriend/Girlfriend and Blue Sky Archives. On the latter band she was the vocalist, drummer, and keyboardist.

Cook was producing an EP for Blue Sky Archives on a weekend in September 2011. Cook started a new project with Doherty and asked Mayberry to sing on a couple of demos. They wrote together for seven or eight months in a basement studio in Glasgow. Cook, Mayberry and Doherty decided to form a new band after the sessions proved to be successful. They chose the name Chvrches, using a Roman “v” to avoid confusions with actual churches on internet searches. Chvrches have also stated that the band name “has no religious connotation, [they] just thought it sounded cool”.

On 11 May 2012, Chvrches premiered the song “Lies” which was available exclusively as a free download from the blog of the Neon Gold label. On 5 November 2012 the band released their official debut single, “The Mother We Share”.
In June 2012 The Guardian featured Chvrches as one of New Bands of the Day. On 5 July 2012 Chvrches performed their debut gig at The Artschool Glasgow, Scotland.

Recover EP and The Bones of What You Believe (2013–present)

In January 2013 Chvrches signed with the independent label Glassnote Records. Previously, in November 2012, Daniel Glass (the owner of Glassnote) received copies of the songs “Lies” and “Recover”. He also headed to the UK and watched Chvrches perform three times (two solo shows, and one opening for Passion Pit).

On 20 September 2013 the band released their debut studio album The Bones of What You Believe on Virgin Records. At the critical aggregator website Metacritic the album received a score of 80 based on 37 reviews.
The song “We Sink” features on the official soundtrack of FIFA 14.

On 30 September 2013 Mayberry penned an op-ed piece in The Guardian on the sexist remarks directed towards her through the band’s social media sites. The band covered Bauhaus’ song Bela Lugosi’s Dead for the ending credits of the movie Vampire Academy: Blood Sisters.